For over 20 years now, Jeff Campitelli is the one drummer that virtuoso-guitarist Joe Satriani consistently relies upon. In Joe’s words, “He sets me free to really play. He always finds a deep groove and pocket, which I’ve learned I need to play my best.”

What makes Satriani so successful is that his music isn’t just about flashy chops….it’s really about well-written songs with memorable melodies and addictive grooves. Like his boss, Campitelli has all the chops, but knows when and when not to use them.

Jeff enhances, supports and lifts the music. He plays for the song. What also sets him apart is his ability to perform equally well, both live and in the studio. Many artists today have their live guy and/or their studio guy but Joe has everything he needs, all on one drum throne.

Through the years with Satriani, Jeff Campitelli has made 21 albums (including 3 Gold and 1 Patinum), 7 live concert DVDs and has played on 15 Grammy nominated songs. On the infamous G3 tours, other master guitarists Jeff has backed up include Steve Vai, Eric Johnson, Robert Fripp, Steve Lukather and Kenny Wayne Sheppard, to name just a few. 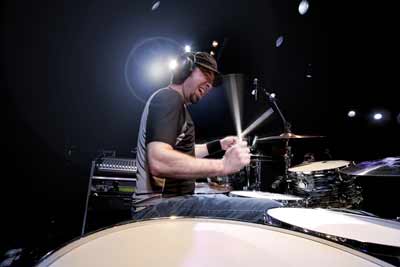